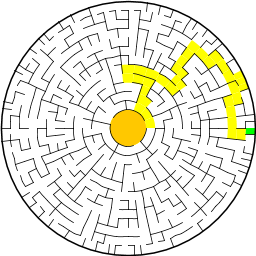 irrGardener is a simple Java program which allows to create and print out different kinds of mazes.

Kids usually love solving mazes, so you can create a bunch of them and give them away. It may be run either via Java Web Start or as a standard application. Because I wrote this program to learn more about the new features in Java 1.5 it requires Java 1.5 or newer to run.

I was asked politely by the author of another (probably much more successful) maze creation program to change the name of my program to avoid confusing his customers. So now my program is called “irrGardener” which is a word not found by Google at the time of this writing (December 19, 2006).

The name derives from German “Irrgarten” which is an old German word for “maze” and is build from two terms:

So “Irrgarten” means as much as “a garden where one gets lost”, and just a little step further “irrGardener” means as much as someone who builds a maze, i. e. a “Maze Creator” (the name this humble tool was christened before). Following the link will bring you to the homepage of the original (and now hopefully only) Maze Creator program, and it may be of interest to you that the author also provides a site called www.freemazes.com where he publishes links to several free maze sites and tools.

You are entitled to use irrGardener any way you like. You are doing that at your own risk. There is no guarantee. If you encounter problems or have suggestions you may drop me a note (click here to write Rammi an email) but don’t expect an answer immediately.

You may even try to improve it on your own.

At the moment the following kinds of mazes are supported:

You can tune each kind of maze to contain more or less cells. You can set the start (left mouse button) and end point (right mouse button) of the solution and set the colors for display and printing. There is always one and only one way between two points of the maze: the solution. It’s possible to display this solution.

You can print mazes, and/or save the results in a number of formats:

If you don’t like Java Web Start for any reason, you can download the program directly. You will get a file named irrGardener.jar which you may usually run via double-clicking it in your GUI or from a commandline with the simple command

The main disadvantage is that the program may do anything it likes with your computer. Even if I promise you that the program is not meant to do any harm (which I do, of course), are you sure you may believe any faceless person from the Internet?

On a web search I found that there are companies which try to sell you tools for uninstalling irrGardener, which is completely ridiculuous. Don’t pay for that. If you really want to get rid of the 2 or 3 MBytes this simple tool is eating up on your hard drive just follow the instructions in one of the next sections. The correct way depends how you installed irrGardener:

Use this way of uninstall when you installed irrGardener via clicking on the small round maze above.

On Windows you can uninstall irrGardener via System Control > Software just like any other program. Just search for the program named irrGardener (or irrGärtner if you are running a German system) and uninstall it.

In general (on Windows as on other operation systems) you can start the Java Control Panel, open the General tab, and click on the Show button in the Temporary Internet Data section. This will display all resources Java downloaded from the internet, go for Applications, search for irrGardener and remove it.

Uninstallation when downloaded as Direct Application

Just remove the file irrGardener.jar from the place where you downloaded it.

Since December 19, 2006 the sources of this program are open and freely available.

Compiling the sources requires a JDK 1.5 or newer from Sun.